Thursday morning I met someone for breakfast who I used to work for in the 90s, we had a great chat and lots of laughs, the tensions and stresses of working in a fashionable eatery long behind us, it was nice just to talk and be friends. It was the most awesome sunny day and after I took myself down to Bronte for a swim, the water, a little cold @16c was none the less spectacular. 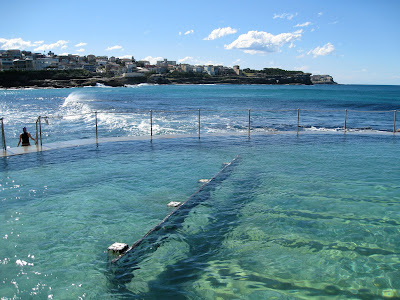 Had arranged to meet some folk I'd met through a mutual friend here in New York for dinner so I went back to my hotel room early evening and caught up on a bit of Aussie telly, it was all politics with the federal election looming. For dinner we went to a simple Thai place in the Cross and after I got meself an early night!
Posted by Ian at 9:33 PM 105 comments:

Well I've been to Australia and back, even with the best intentions I didn't do any blogging, so I shall commence now, I have an archive of photos and text messages to sift through and also there is the human memory, to begin......
Monday 18 August, left New York in the evening, crossing the date line and arriving in Sydney on Wednesday morning, there is the Royal National Park in view just before landing at Sydney, I always think it must of been what Sydney's coastline must of looked like before Anglo settlement 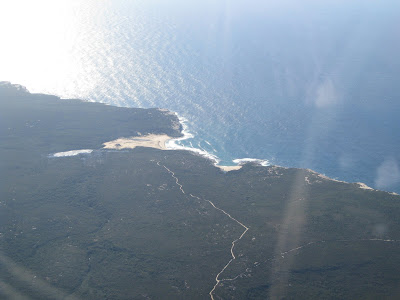 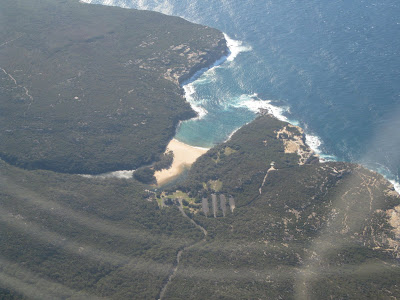 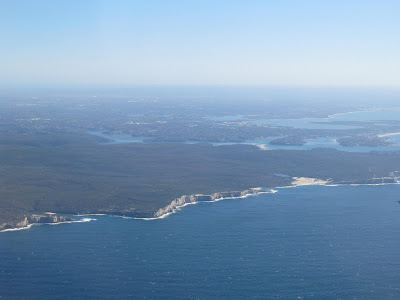 Wattamolla on the left, Little Marley and Marley on the right, further right you would come to Sydney 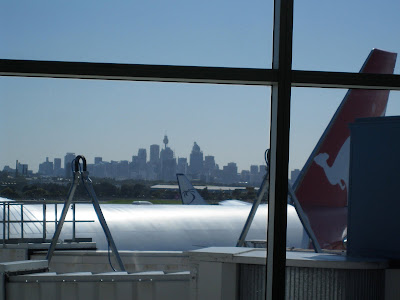 Golly landing in Sydney was just amazing, it was a crisp, clear winter's day, quite typical, something around 20c (70f), that 14 hr from LA is just a killer on top of the 5 hr from NYC, though I did manage to stumble into a hire car and make it to my Kings Cross hotel, it all felt a little surreal, I did manage to keep to the left while driving. Southern Cross Drive never looked so good.
I tried to sleep but could not, I needed to get an internet connection and also a mobile phone so I went to the Telstra shop in Bondi Junction and did just that, after I went to meet my parents who were in Sydney on their way home to Melbourne from their annual grey nomad trek to the sunshine in Queensland, I met them in the Botanic Gardens, we had a walk and then a cuppa tea in the NSW art gallery and then made our way via the Harbour Tunnel to the Lane Cove National Park where they had their van parked, and then on to the Lane Cove RSL where we all had fried whiting and chips for tea, as it was only 6:00pm, to early for dinner, a great first day of a week in Sydney.

Summer in the City

Sexy clip, all looks very New York, vocals by night life identity Cazwell, singing about his icecream truck, sweaty dancing boys in tow. I will say it has indeed been a sweaty summer. Cazwell sings he's on the street May to July, I guess like most he's out o' town for August. Somewhere I hope he can get some nice icecream pies.
Posted by Ian at 11:33 PM 6 comments: 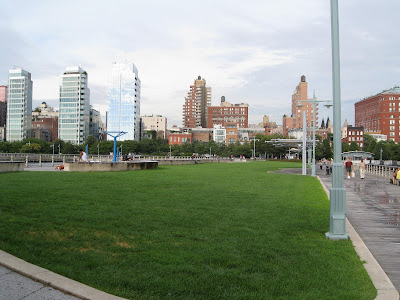 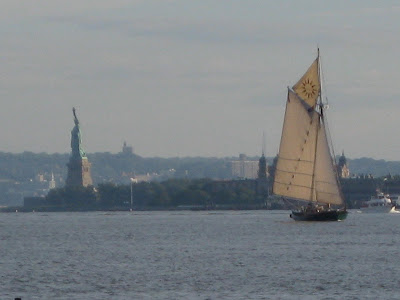 Today it rained, in a dry patch I took myself for a walk along the Hudson, the grass on The Pier was empty due to the wet, if it were dry I would of being enjoying the sun and and reading my book, not at all walking, I did take a picture though of a nice sail boat and Lady Liberty.
Posted by Ian at 9:04 PM 3 comments:

Well I'm up with my new blog, blogger has changed a little since I was last here, comments aren't turning up in my inbox, it will just be a setting somewhere I'm sure, many thanks to the comments made, they are much appreciated. Also I need to put up some links, again blogger is not as it was, in some time though I will get it done. Anyway, am off to Australia soon, and am quite exited about that, am even looking forward to getting on a plane it's been so long since I've been anywhere, tho I'm sure that thrill will wear off soon enough into the 24 hour travel time, first stop is Sydney for 5 days then Melbourne for 2 weeks.
update! Comment email setting fixed
Posted by Ian at 10:45 PM 2 comments:

Weekend in the City 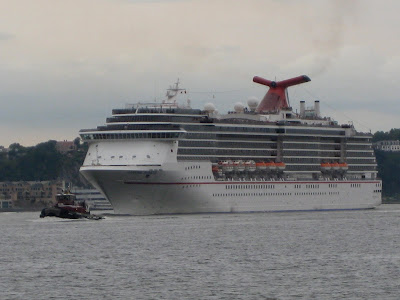 Saturday on the Hudson, a cruise liner off to who knows where, and on Sunday the setting sun along 49st 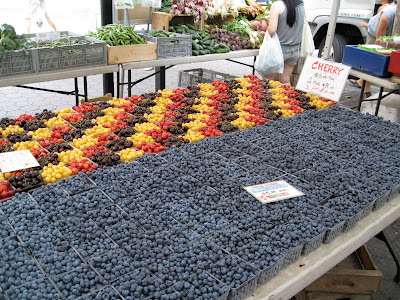 The farmers markets around Manhattan are just bloomin! My local one on 47st is on a Wednesday and I just love going down to do my shopping there. And so I do offer a 'market report'! Peas and asparagus are still good but past their peak, green and yellow beans are just in and are very nice, fresh soy in for the first time this week though a little small and pricey, will buy in a week or two, tomatoes are about too, but as yet not good, zucchini are there ,very nice, the other nightshades, capsicums and eggplants are still ahead of us, ratatouille days are still to come and blueberries are just perfect, indigenous to this land I do believe. I bought some and made a blueberry cheesecake, it was just delicious, the punters I made if for lapped it up!
Posted by Ian at 12:51 AM 3 comments: